For fourteen years Tammy Carter Bronson has traveled across the country inspiring children to be dedicated readers and better writers. She has conducted speaking engagements at more than 650 elementary schools in 21 states presenting to over 300,000 students.  Her fourth picture book, SEA HORSE, RUN!, was awarded the Next Generation Indie Book Award for Best Children’s Picture Book in 2011. In January 2014 Tammy conducted her first international author visit at the Rabat American School in Rabat, Morocco.

Mrs. Bronson lives in Fayetteville, Arkansas and writes historical fiction for YA/adults in her spare time. She is currently seeking a literary agent who will help her find a publisher for her novels. 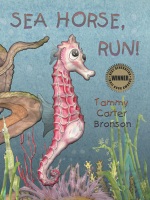